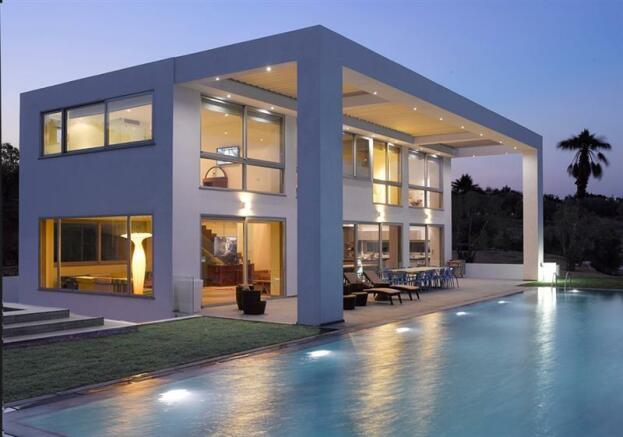 FURTHER INFORMATION
The modernly designed villa comprises of 2 floors and a lower-ground level with 5 bedrooms and 6 full bathrooms, totaling over 500 sq. meters. The villa is situated in a 4,000 sq. meter of garden and terrace garden, featuring a half size Olympic pool, jacuzzi and a private pathway to the sea and floating dock. The villa is just 30 meters away from the Aegean seafront and 25 minutes away from Mitilini Airport. Due to its superb location, offers the possibility to anchor any sized yacht in any sea condition, in that bay, right in front of the property. The Villa’s water supply comes from its own well. It comes fully furnished and equipped with top of the line appliances and amenities.
The villa has been constructed to the highest standard using the most luxurious decor, fittings and fixtures. The interior is furnished with contemporary high end furniture and bright decor. The huge living space is extremely well equipped with the latest technology. This includes satellite TV, high speed Wifi, security alarm, oversized kitchen appliances, BBQ. Each room has its own temperature controlled a.c through a central system.
The infinity pool is catered for both professional sports training as well as recreational swimming. The water is 40% sea water and 60% sweet water. There is no need to add any chemicals as the pool system produces a natural chlorine effect from the salt of the seawater. Just by the pool there is a vast Jacuzzi that can accommodate up to 10 people.
The villa overlooks the picturesque bay and the peninsula, behind spreads the Aegean Sea. The area is a coast-lined oasis in an olive forest, with beautiful views of lush green trees and sea-blue waters.

LOCATION
Lesbos is a Greek island located in the northeastern Aegean Sea. It has an area of 1,632 km2 (630 sq mi) with 320 kilometres (almost 200 miles) of coastline, making it the third largest Greek island. It is separated from Turkey by the narrow Mytilini Strait. Lesbos is a separate regional unit of the North Aegean region, and the only municipality of the regional unit. Its population is approximately 90,000, a third of which lives in its capital, Mytilene, in the southeastern part of the island. The remaining population is distributed in small towns and villages. The largest are Kalloni, the Gera Villages, Plomari, Agiassos, Eresos, and Molyvos (the ancient Mythymna).

Mytilene was founded in the 11th century BC by the family Penthilidae, who arrived from Thessaly, and ruled the city-state until a popular revolt (590 – 580 BC) led by Pittacus of Mytilene ended their rule. In early Middle Ages, it was under Byzantine and Genovese rule. Lesbos was conquered by the Ottoman Empire in 1462, who ruled the island until the First Balkan War in 1912, when it became part of the Kingdom of Greece. The island is forested and mountainous with two large peaks, Mt. Lepetymnos at 968 m (3,176 ft) and Mt. Olympus at 967 m (3,173 ft), dominating its northern and central sections. The island’s volcanic origin is manifested in several hot springs and the two gulfs.

DIRECTIONS
30 m from the sea

25 km from the city of Mitilini

30 km from the airport

Savills plc is a leading international property services company with a full listing on the London Stock Exchange. The company has undergone dynamic growth in recent years establishing itself as a powerful player on the international stage with offices and associates throughout the UK, Europe, Asia Pacific and the US.

Savills Hellas Ltd. is one of the leading property services company in Greece. As of 1st May 1997, the Company is a full member of the Savills International Network. Savills Hellas Ltd. has undergone dynamic growth in previous years establishing itself as a powerful player on the local and regional property scene. Savills Hellas advises clients on commercial, residential, hotel and leisure properties. The team of the Greek office provides advice and support to help companies and investors to maximise the benefits and efficiency of their property investment.
We have extensive knowledge of both Greek and Balkan real estate issues coupled with advisory and implementation skills. Our services are focused on valuation and advisory services of all types of properties including residential properties (first and second homes), hotels, theme parks etc.

This is a property advertisement provided and maintained by Savills Hellas Ltd, Greece (reference 781) and does not constitute property particulars. Whilst we require advertisers to act with best practice and provide accurate information, we can only publish advertisements in good faith and have not verified any claims or statements or inspected any of the properties, locations or opportunities promoted. Rightmove does not own or control and is not responsible for the properties, opportunities, website content, products or services provided or promoted by third parties and makes no warranties or representations as to the accuracy, completeness, legality, performance or suitability of any of the foregoing. We therefore accept no liability arising from any reliance made by any reader or person to whom this information is made available to. You must perform your own research and seek independent professional advice before making any decision to purchase or invest in overseas property.

Savills, 64 Louise Riencourt Str., Athens, Greece
More properties from this agent
Request Details
or call 03339 396012
Calling from outside the UK? 00302106996311
Save Property
Add Notes
Please sign in or create an account to add notes
Print
Send to Friend

Learn everything you need to know to successfully find and buy a property in Greece.