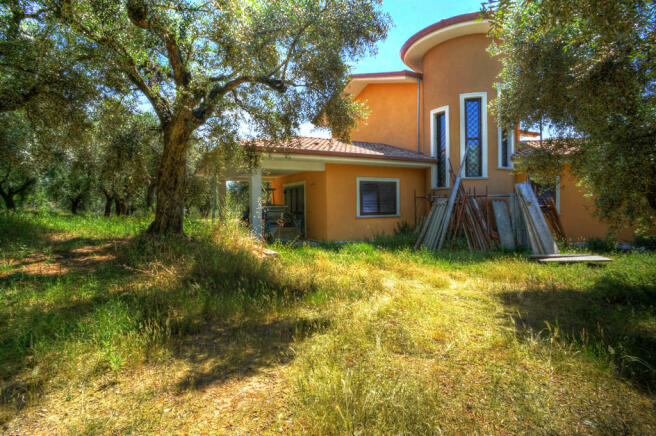 Villa Filomena is a striking modern house in a quiet location that nonetheless is only a minute or two's walk from the post office, bakery, cafe, pharmacy, greengrocers and the other amenities of Colli town centre.

The house has been built, but not yet fitted out, so that it can be completed in a number of ways: as a large private home, as separate apartments, or (as originally planned by the owner) with office or work space on the lowest level.

The main floor of the house has a kitchen with walk-in pantry, opening onto a large covered terrace. The large sitting room opens onto a wood covered porch. The bedrooms, with wrap around balcony, can share a bathroom or, at this stage, could still easily be altered to have ensuites.

The top floor, which boasts a balcony with sweeping views, has currently been left as largely open space, which can be divided and used as you like.

The lower floor has been laid out with a small separate apartment or guest accommodation, garage, and extensive further storage and workrooms - there is plumbing for a further bathroom, because this area was intended to become a professional office for the owner's son.

The staircase between the levels runs up the 'tower', and has been designed so that it can either be open to the floors, as at present, or closed off, providing access between separate apartments, each with their own entrance. The garden (1,400 sq mt), which extends in two wings from the house, can also be divided easily between the apartments; alternatively, if it remains one complete house, there can be a garden area, and a flat area suitable for a swimming pool.

COLLI AND THE CIOCIARIA

Colli is a charming little medieval hilltop town in the area of Italy called the Ciociaria, the name given to the fertile land that lies south of Rome but north of Naples, situated inland in the hills in the heart of Italy. Nearby towns include Monte San Giovanni Campano, Anitrella, Arce and Fontana Liri, all of which have a series of festivals, concert series and other interesting public events throughout the year. Colli itself has a very nice wine festival, as well as the normal civic festivals celebrating the town's patron saint day etc.

Often overlooked, both by tourists and by those foreigners in search of an Italian home, in favour of the more publicized regions of Tuscany and Umbria, the Ciociaria remains largely an unspoilt gem with beautiful scenery and medieval hilltop towns. A home or second home in the Ciociaria, in the hilltop towns of Arpino, Veroli, Alatri or in the rolling countryside that surrounds them, will afford you a setting where over two thousand years of history combine with an idyllic rural Italian lifestyle, where you can still discover the 'real' Italy and take time out from the busy crowds of the larger tourist cities, while being less than ninety minutes journey from central Rome or either of Rome's two airports.

This is a property advertisement provided and maintained by Via Romana Srls, Italy (reference VillaFilomena) and does not constitute property particulars. Whilst we require advertisers to act with best practice and provide accurate information, we can only publish advertisements in good faith and have not verified any claims or statements or inspected any of the properties, locations or opportunities promoted. Rightmove does not own or control and is not responsible for the properties, opportunities, website content, products or services provided or promoted by third parties and makes no warranties or representations as to the accuracy, completeness, legality, performance or suitability of any of the foregoing. We therefore accept no liability arising from any reliance made by any reader or person to whom this information is made available to. You must perform your own research and seek independent professional advice before making any decision to purchase or invest in overseas property.