8 bedroom block of apartments for sale 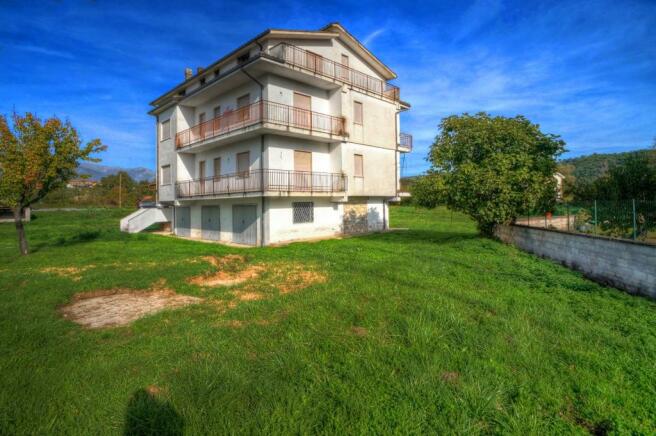 Casa Vuotti is a large and light-filled 350 sq.mt. property set in a very quiet countryside location that is still within walking distance of the hamlet of Carnello with its shops, restaurants, services, bars and cafés. Less than 10 minutes drive reaches the medieval hilltop town of Arpino or arrives into Isola del Liri, a historic town centred on an island formed by the confluence of two rivers, one of which cascades as a splendid waterfall beside the main town bridge. The centre of Rome is less than 90 minutes away as are Rome's international airports.

Casa Vuotti represents an outstanding commercial proposition, a small block of three large apartments that has been very competitively priced to reflect the planned retirement of the developer. The development has many attractive features and is in a tranquil and pretty rural setting with views across to the mountains, with excellent road access and within walking distance of shops, restaurants and services.

Each apartment is an entire floor, and there is also ample garage and storage space. The large 1,000 sq.mt. garden can either be divided between apartments, or be retained as a communal asset. Indeed, there is sufficient space for each apartment to have a private garden, but for there also to be a communal swimming pool (subject of course to the necessary permits). The apartments also have their own balconies and all apartments have nice views.

The entire ground floor is parking and storage.

A marble staircase runs up one side of the building, providing access to each apartment and to the garage.

The top floor apartment is slightly smaller and has not been finished - it has not been plastered or painted, and the bathrooms have not been fitted out. It can have a similar layout to the two other apartments, although there is only one balcony.

The developer originally built the apartments for rental, but now wishes to retire and dispose of his entire property holdings. He would prefer to sell the whole block as one, but is also prepared to sell the apartments individually at market value - he has estimated a combined total value of Euro 350,000 for the three apartments if bought individually, thus creating a very significant savings opportunity upon the purchase of the complete building listed here at Euro 260,000. Other nearby properties with the same owner, in various stages of restoration, are also available for purchase (Casa Magnene, Casa Quaglieri Vecchia, Casa Quajja, Casa Crepaccio).


ARPINO AND THE CIOCIARIA

Arpino and Isola del Liri are among the major medieval towns in the area of Italy called the Ciociaria, the name given to the fertile land that lies south of Rome but north of Naples, situated inland in the hills in the heart of Italy. The hamlet of Carnello lies between the hilltop town of Arpino and the riverside island town of Isola del Liri. For the inhabitants of the surrounding countryside, Carnello provides an old post-house hotel with an award-winning restaurant, family restaurants, bars and cafés, shops and services, and is a hub for public transport by bus and coach to neighbouring towns and indeed into Rome.

Often overlooked, both by tourists and by those foreigners in search of an Italian home, in favour of the more publicized regions of Tuscany and Umbria, the Ciociaria remains largely an unspoilt gem with beautiful scenery and medieval hilltop towns. A home or second home in the Ciociaria, in the hilltop towns of Arpino, Veroli, Alatri or in the rolling countryside including Carnello that surrounds them, will afford you a setting where over two thousand years of history combine with an idyllic rural Italian lifestyle, where you can still discover the 'real' Italy and take time out from the busy crowds of the larger tourist cities, while being less than ninety minutes journey from central Rome or either of Rome's two airports.

This is a property advertisement provided and maintained by Via Romana Srls, Italy (reference CasaVuotti) and does not constitute property particulars. Whilst we require advertisers to act with best practice and provide accurate information, we can only publish advertisements in good faith and have not verified any claims or statements or inspected any of the properties, locations or opportunities promoted. Rightmove does not own or control and is not responsible for the properties, opportunities, website content, products or services provided or promoted by third parties and makes no warranties or representations as to the accuracy, completeness, legality, performance or suitability of any of the foregoing. We therefore accept no liability arising from any reliance made by any reader or person to whom this information is made available to. You must perform your own research and seek independent professional advice before making any decision to purchase or invest in overseas property.