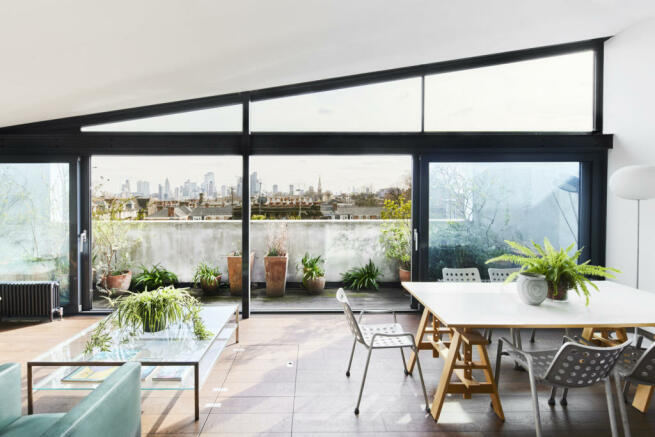 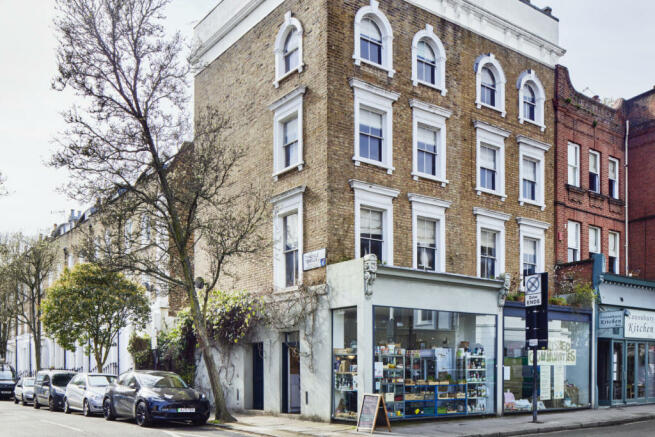 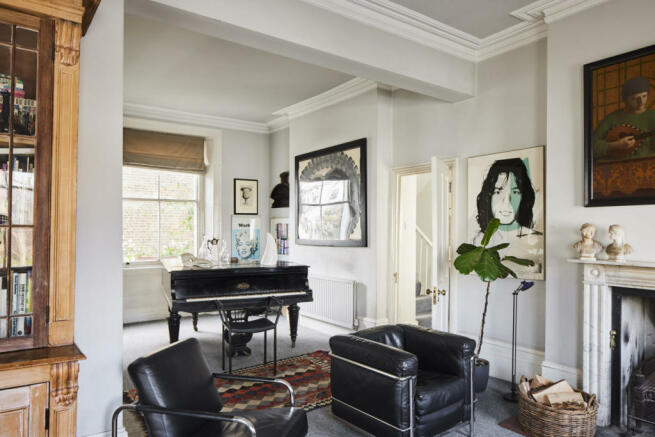 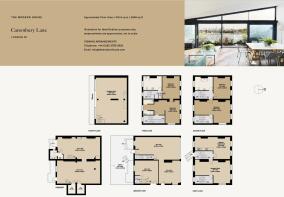 Quietly removed from the coveted northern section of Islington’s Upper Street, just west of Canonbury Square, lies this rare duo of Victorian buildings united as one enormous house and garden. With commercial space across its ground and lower ground levels, there is more than 5,500 sq ft of internal space overall. It occupies a wonderful corner site on the peaceful intersection of Canonbury Lane and Tyndale Terrace. Much of the house benefits from the light of three aspects and excellent, elevated views of London from a sweeping fourth-floor extension designed by Studio 54 Architecture.

The residential part of the house is entered on Tynedale Terrace through a pair of antique French front doors surrounded by Wisteria and Clematis. This opens to a welcoming hall with high ceilings, timber flooring, and a floor-to-ceiling sash window looking out onto the stepped garden.

A staircase, one of two through the house, leads up from the south-east corner to the first floor. First, to a double reception arranged in an L-shape and filled with light from windows on three sides. On the opposite side of the plan, in a similar layout, lies the kitchen and dining room with a window looking onto the garden and beyond to Union Chapel. From the landing of the second staircase are steel steps that lead down to the garden.

There are two bedrooms on each of the second and third floors, one en suite and two further bathrooms between the remainder. The fourth floor was designed by Charles Thompson of Studio 54 Architects as a studio workspace in a sweeping open plan that covers both buildings with a wall of glazing across the southern aspect and a stainless steel kitchenette opposite. A wide terrace sits behind a lowered south-facing parapet and overlooks the city of London and beyond. The window wall and roof are raked to follow the sightlines from Canonbury Square and create a bold asymmetrical dimension to the simple rectangular plan.

The commercial space is offered with vacant possession. It is currently occupied on an informal basis by a charming local produce shop but could be used as a live/work studio, office or gallery space. Once the headquarters of renowned furniture brand Coexistence, it forms an L-shape on the ground floor with a glazed double shop front and steps down to the commercial basement, which comprises two large open-plan spaces, a WC and access to the garden at the rear.

The stepped, walled garden can be accessed from the commercial space, the entrance hall to the residential section, and from the first floor via a set of steel steps with one curved side, designed by the architect Charles Thompson.

Canonbury Lane is just minutes from the boutiques, cafes and eateries of Upper Street, which is home to an abundance of amenities, from Ottolenghi to Gail’s, the Almeida Theatre to The Old Red Lion Theatre & Pub. The charming Compton Arms and the wonderful Union Chapel are both a minute’s walk from the house.

Islington High Street and the excellent Camden Passage are also close by. The area has some very good gastropubs, including The Drapers Arms and The Albion. Corbin and King’s Bellanger is nearby on Islington Green.

The much-admired shops and restaurants of Highbury Barn are just to the north, through the green open space of Highbury Fields – which has tennis courts, a playground and a swimming pool. King’s Cross and Coal Drops Yard are also within easy reach.

The area enjoys excellent access to public transport, including several main bus routes to the City and central London. The Victoria Line at Highbury & Islington is a few minutes’ walk from the house, and the Northern Line is available at Angel. The Eurostar at King’s Cross St Pancras is also easily accessible, as are London’s airports.

Several quality schools and universities are within easy reach of Canonbury Lane.

Disclaimer - Property reference TMH79093. The information displayed about this property comprises a property advertisement. Rightmove.co.uk makes no warranty as to the accuracy or completeness of the advertisement or any linked or associated information, and Rightmove has no control over the content. This property advertisement does not constitute property particulars. The information is provided and maintained by The Modern House, London. Please contact the selling agent or developer directly to obtain any information which may be available under the terms of The Energy Performance of Buildings (Certificates and Inspections) (England and Wales) Regulations 2007 or the Home Report if in relation to a residential property in Scotland.