All aboard for rail-friendly ski homes!

Covid made last winter a non-event for mountain resorts, which means this year skiers and house-hunters in the Alps are doubly keen to hit the slopes. Before you book flights though, why not consider travelling by train – it’s easier than you think, is a year-round option and you’ll be helping the planet. Head to any of these Alpine railway towns for access to world-class pistes… 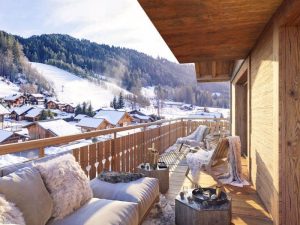 Two-bedroom apartment in Les Gets, France

Reaching the Alps by rail is set to become increasingly popular, as more of us ditch the car for longer journeys and opt for a more relaxed, greener alternative to flying. In fact, a recent survey by YouGov for travel website Omio showed that 45 per cent of Brits would like to choose train travel over flying for environmental reasons.

New to the party this year are packages offering direct trains from London St Pancras to either Bourg St Maurice or Moûtiers in the French Alps. Tickets include onward transfer to six resorts, lift passes and accommodation. The service, which travels overnight and takes less than 10 hours, is operated by French tour operator Travelski, which has taken over Eurostar’s ski train and now runs it as the Travelski Express.

Your options increase greatly though if you are happy booking just your rail tickets and having one change across the Channel. This just means taking the Eurostar to Paris or Brussels and hopping on either a TGV or overnight service headed south to the mountains! In many cases, your journey will be as quick or quicker than travelling direct on the Travelski Express. Return tickets should be less than £200, typically around £120-£150 (this excludes all inclusive Travelski packages).

These five stations in the Alps show just how accessible rail travel to the slopes can be. 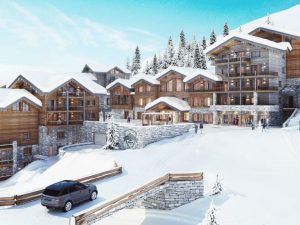 Cluses, which is under six hours from Paris by TGV, is an entrypoint for a selection of popular resorts. Most are 30-40 minutes transfer by road and include Les Gets and Morzine, part of the Portes du Soleil, as well as the Grand Massif ski area destinations of Flaine and Samoëns, while Megève is also half an hour in the opposite direction.

In the heart of the Tarentaise Valley, home to some of France’s most famous ski resorts, Bourg St Maurice is where travellers on the Travelski Express get dropped. That’s not to say you can’t travel there independently from London, by changing and jumping on a TGV in Paris, just five hours away. Bourg is a true gateway to the slopes, being just 40 minutes from the huge Espace Killy ski area, which includes world-class Tignes and Val d’Isère.

Les Arcs, La Plagne and Peisey-Vallandry, all part of the Paradiski area, are only 35-45 minutes transfer from Bourg too, although Moûtiers is also convenient for La Plagne. 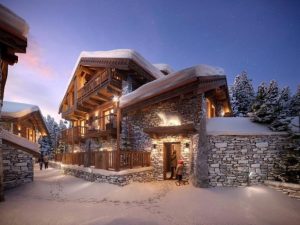 Less than nine hours from London, by taking the Eurostar to Paris and then changing to a TGV, Oulx is a station in the north-west corner of Italy’s Milky Way ski area, close to the French border. The resort of Sauze d’Oulx is five minutes away, while popular Sestriere is around 25 minutes by road.

Across the border, the French resorts of Serre Chevalier and Montgenèvre, are around 45 minutes’ and 25 minutes’ transfer respectively, the latter also being linked to the Milky Way.

On the same line as Bourg St Maurice and Travelski’s other rail destination, Moûtiers is the gateway to the ski hubs that make up the world’s largest ski area, Les 3 Vallées. This means that the celebrated resorts of Méribel, Courchevel, Val Thorens, Les Menuires and Saint-Martin-de-Belleville are all around just 30-45 minutes transfer from the station, depending on your destination.

Moûtiers can be reached from London via changing in Paris, a 4.5-hour TGV ride away. 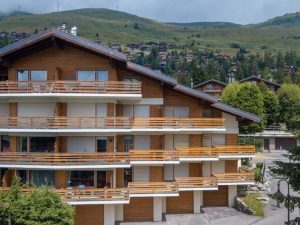 Changing trains in either Geneva or Lausanne – and in some cases adding a funicular ride –  accesses some of Switzerland’s finest ski resorts in the Valais region. For Verbier, switch change at Martigny for La Chable and then a final cable car journey to the resort centre.

Crans-Montana requires a change in Sierre which is linked to the resort by a 12-minute funicular ride. Further along the valley with a change in Visp, the journey of just over one hour takes you into the heart of the pedetrianised resort of Zermatt.