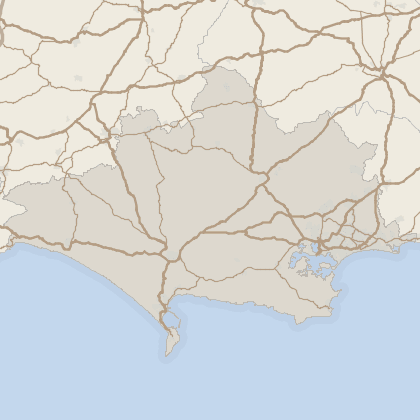 Located on the English Channel coast, Dorset is home to some of England's best-loved seaside resorts and glorious golden beaches, with mile upon mile of unspoilt countryside, and countless ancient villages. About half of the county's population lives in the South East Dorset conurbation, comprising Bournemouth, Poole and Christchurch, along with a few satellite towns. Weymouth has been a major resort since the 18th century. Property in Dorset includes a variety of sought-after period homes, including manors, rectories and farmhouses. In Dorchester alone, the county town since 1305, there are new developments, retirement apartments, new build and Victorian cottages and bungalows. The Sandbanks Peninsula at Poole Harbour houses some of the UK's most expensive and exclusive addresses, but you don't have to be a millionaire to live in the county! House prices in Dorset are typically on a par with the rest of the UK, with Christchurch, Purbeck and East Dorset among the pricier districts. Weymouth and Portland and North Dorset are some of the more affordable areas. A majority portion of the county is earmarked as a place of exceptional Natural Beauty. The Jurassic Coast World Heritage Site includes landforms like Chesil Beach, Lulworth Cove, the Isle of Portland and Durdle Door. And, of course, Dorset is also Thomas Hardy country. As well as larger, glitzy resorts like Bournemouth, there are smaller ones including Lyme Regis and Swanage. Historic market towns include Shaftesbury and Sherborne in the north, or ancient Saxon settlements like Wareham and Wimborne Minster in the east. There are also some big local employers, and several naval and military bases. It may be overwhelmingly rural, but Dorset is hardly a cultural wasteland. Major venues include Pavilion Theatre, Poole's Lighthouse centre, Bournemouth's BIC and O2 Academy. The Bournemouth Symphony Orchestra performs dozens of concerts annually.

There are two rail lines offering links with London, and the Heart of Wessex train line runs from Bristol to Weymouth in both directions. The county is dissected by the A35, A303 and A31 trunk roads. The A303 links London and the West Country via the M3, and clips the county's north-west. Dorset has two sea ports at Poole and Weymouth, and Bournemouth's international airport is at Hurn near Christchurch.

Dorset County Council runs most of the local education, while Bournemouth and Poole and unitary authorities control schools in their areas. Wimborne, Dorchester, Ferndown and Purbeck have first, middle and high schools, while most of the rest of the county has a two-tier system. Poole and Bournemouth run a selective system, and each has two single-sex grammar schools with an 11-plus examination. The county has six self-governing academies, maintained by the Department for Education, and there are a number of independent schools. The county also has further education centres in Weymouth and Dorchester, while Bournemouth & Poole College is one of the UK's largest. Bournemouth has its own university, and an Arts University College. Finally, with low crime, high employment, and a mild climate, not to mention its spectacular setting, Dorset offers residents young and old an excellent quality of life.

Property for sale in Dorset

Take a look at our current list of property for sale in Dorset. Rightmove.co.uk lists over one million flats and houses to buy or to rent across London and the UK. We update our listings continuously. You may also want to see houses and flats in other areas of England, including Cornwall, Devon, Gloucestershire, Somerset, Wiltshire and Bristol (County).