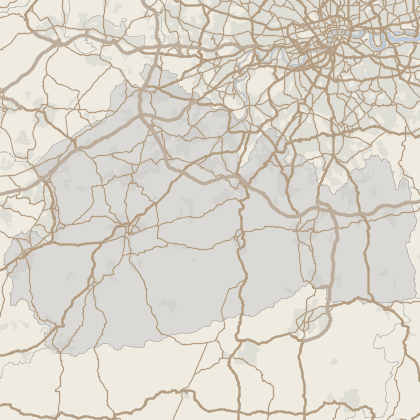 Surrey - a home county base on London's doorstep

Surrey combines closeness to the UK's capital with stunning countryside. It is one of the most densely populated parts of the UK, yet nearly a quarter of it is covered in woodland, and it is also known for its heathland and golf courses. It is divided in two by the chalk ridge of the North Downs. With borders on Greater London, Kent, East and West Sussex, Hampshire and Berkshire, affluent Surrey offers an extensive commuter belt of towns and villages, and enjoys excellent transport links. There are good schools, superb shopping opportunities and low crime rates. Property in Surrey is very varied, with the south leafier and more rural than northern areas. In the more southerly districts, you'll find charming villages, traditional country pubs and rolling hills. Across the county, you'll find a great variety of homes from different periods and in different styles. There are Victorian, genuine and mock Georgian properties, plus terraces and late Victorian villas, as well as 1930s buildings. South of Guildford, there are examples of architecture designed by Edwin Lutyens, one of England's most distinguished 19th century architects. There are also more modern properties, from town centre flats in purpose-built blocks to contemporary estates in suburban areas. For those who don't wish to commute into London, there are plenty of major employers based locally - from large corporations to the NHS to Surrey University. The county is blessed with a myriad of places for great days out - such as Kew Gardens, Thorpe Park and Hampton Court. Surrey is also home to countless lovely landscapes, from Box Hill to the Devil's Punch and Frensham Common, while the Surrey Hills are an area of outstanding natural beauty.

Surrey has many routes into London, with Guildford, Redhill and Woking the main commuter towns. It lies on both the south western and Brighton mainlines. For air travel, London's biggest airports, Gatwick and Heathrow, are both close at hand. Three major motorways pass through the county: the M25, M3 and M23. Other main roads include the A3 London to Portsmouth route, the A24 to the Sussex coast, and the A31 Guildford to Bere Regis trunk road.

Excluding sixth form colleges, there are over 50 state schools across Surrey, along with dozens of independents. Some districts have integral sixth forms, others have separate sixth form colleges. In addition to the University of Surrey in Guildford, the county boasts the University of Creative Arts at Farnham, and Egham's Royal Holloway, part of London University. In such a large and varied county so close to London, house-hunters are bound to find an ideal property to call home.

Property for sale in Surrey

Take a look at our current list of property for sale in Surrey. Rightmove.co.uk lists over one million flats and houses to buy or to rent across London and the UK. We update our listings continuously. You may also want to see houses and flats in other areas of England, including Berkshire, Buckinghamshire, Hampshire, Kent, Oxfordshire, West Sussex, Isle Of Wight and East Sussex.