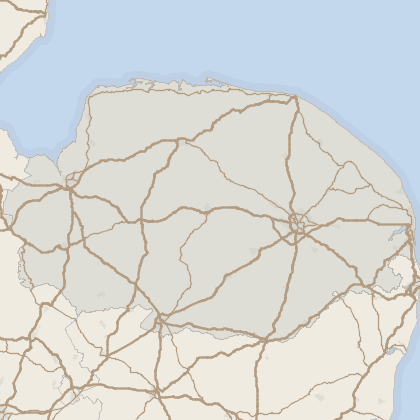 With its low population density and huge swathes of countryside, Norfolk has long been a draw for those wanting a second home somewhere with a gentler pace of life. It's a big county, stretching more than 60 miles from medieval King's Lynn to Great Yarmouth. It is also home to the east of England's largest city, Norwich, along with countless small towns and lovely villages. Its unique selling point is undoubtedly the Broads National Park, a delightful string of inland waterways near the county's east coast, bordering Suffolk. (Norfolk also shares borders with Cambridgeshire and Lincolnshire.) As for property in Norfolk, it can be whatever you want to it be, whether you dream of a seaside home, a city centre pad or a cottage made from traditional local flint. Choose from hamlets, villages, markets towns and coastal areas. Norwich, in particular, has seen several new developments. The city offers some great opportunities for first-time buyers, along with family homes from period properties to modern townhouses. One of England's biggest settlements in Norman times, Norwich is the county's main cultural and business settlement. It has two cathedrals, a good theatre, some stunning shopping and a leading art house cinema. There are also plentiful opportunities for work, with several big public and private sector employers in the area, from Aviva to the University of East Anglia to Norwich City Council.

King's Lynn is a sea port and market town with two theatres, museums and a number of sporting and cultural venues, while Great Yarmouth, gateway to the Broads, is an attractive coastal resort with plenty to see and do. Outside the towns, the Campaign to Protect Rural England has found Norfolk to be one of the UK's most peaceful counties, based on its natural landscapes, opportunities to hear birdsong, peace and quiet, woodland and being able to see stars at night.

The A11 connects Norfolk with Cambridge and London via the M11. Two routes from the county have a link with the A1: the A47, running into the Midlands, and the A17 to the East Midlands via Lincolnshire. Both meet at King's Lynn, also the A10 to London's starting point. There are 30 rail stations across the county, with most big settlements served by trains. Norwich is the busiest one, with direct links to London Liverpool Street. Norwich Airport has flights across Europe, including a link to Amsterdam.

A good range of primary and secondary schools are to be found across the county, though in some rural areas sixth form provision is in larger towns rather than locally. There are 12 independent schools, including Thetford Grammar, Britain's fourth oldest. Wymondham College is the UK's biggest state boarding school. Along with the University of East Anglia, and Norwich University College of the Arts, the county is also home to City College Norwich and the College of West Anglia. For anyone who is seeking city or coastal living, or who fancies messing about on the Broads and enjoying the glorious English countryside, Norfolk will make an excellent home base.

Property for sale in Norfolk

Take a look at our current list of property for sale in Norfolk. Rightmove.co.uk lists over one million flats and houses to buy or to rent across London and the UK. We update our listings continuously. You may also want to see houses and flats in other areas of England, including Bedfordshire, Cambridgeshire, Essex, Hertfordshire and Suffolk.