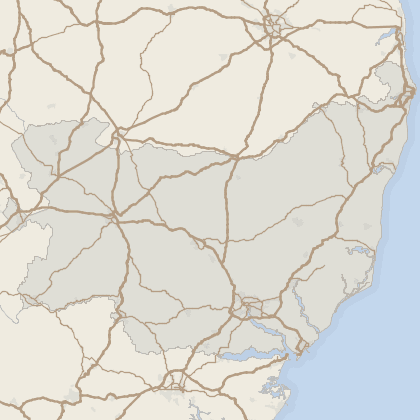 Suffolk - coastal, country and town life on your doorstep

Bordering Cambridgeshire, Essex and Norfolk, Suffolk is a county of wide open skies, stunning coastline and a rolling countryside which has inspired countless artists. With 45 miles of unspoilt coast, Suffolk is home to a string of seaside towns and resorts, along with bustling Ipswich, and historic places like Bury St Edmunds, Stowmarket and Woodbridge. Lowestoft is the UK's most easterly town, while Felixstowe is its biggest container port. Property in Suffolk across regional hubs, small towns and villages tends to be attractively priced, with good access to quality local facilities. Housing hotspots include Britain's horse-racing capital Newmarket, Stowmarket, Felixstowe, the port town of Lowestoft and Ipswich, the county town.

In Stowmarket alone, housing ranges from new builds to detached bungalows, semi-detached cottages, Edwardian houses and barn conversions. This medium-sized town between Bury and Ipswich has good transport links and amenities, and a number of major employers. The waterfront at Ipswich has been extensively redeveloped and is the town's focal point. Just five miles from the coast, Ipswich offers great shopping, restaurants, two cinemas, theatres and nightclubs. For culture vultures, the Aldeburgh Festival, founded in 1948, is one of the UK's most important classical music festivals. Henham Park, near Blythburgh, has hosted the open-air Latitude festival of music, comedy and poetry since 2006. Much of Suffolk's dramatic coastline is quite remote, and inhabited only by rare species of seabirds, so huge swathes of the Suffolk Heritage Coast are designated nature reserves.

From Ipswich there are four trains an hour to London's Liverpool Street, with a journey time of just over an hour. There are also cross-country rail links via Peterborough to the Midlands and further north. The county's road network provides a link to London and the south east via the M11 or the A12. The A14 is an important east-west route, connecting Cambridge to Suffolk, and the Midlands and the North. London Stansted and Luton airports are both easily accessible by road.

Some of the county operates a three-tier system with primary, middle and upper schools. Nearly all of the latter have sixth form provision. The county also has 14 independent schools, the largest being the Royal Hospital School, near Ipswich, which takes boarders. Suffolk also has four further education colleges, and University Campus Suffolk has accepted students since 2007. With so much to enjoy in the way of open coastal and rural spaces, and historic towns and villages, it is easy to understand why nine out of 10 respondents to a MORI poll relating to the county said they loved where they lived!

Property for sale in Suffolk

Take a look at our current list of property for sale in Suffolk. Rightmove.co.uk lists over one million flats and houses to buy or to rent across London and the UK. We update our listings continuously. You may also want to see houses and flats in other areas of England, including Bedfordshire, Cambridgeshire, Essex, Hertfordshire and Norfolk.